The Miniaturist BBC Drama , the making of the dolls

Happy New Year !
Once again the new year starts with resolutions to update my blog more often !
This year I am starting with some interesting news about a project I worked on in spring last year .
Those of you in the UK may have tuned in to watch the BBC1 adaptation of Jessica Burtons wonderful novel "The Miniaturist" on Boxing day , concluding on the 27th December 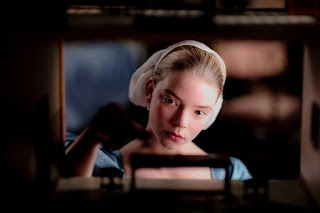 I was watching avidly, not only because I love the book so much , but also because I was thrilled to have been involved in making the miniatures for the program 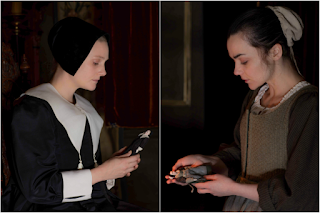 I created the dolls for the program , shown here in some of the actors hands
﻿ 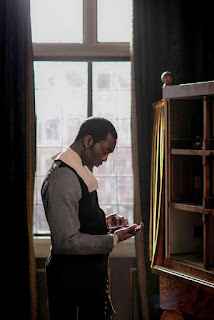 A closer photo of the Marin and Johannes dolls 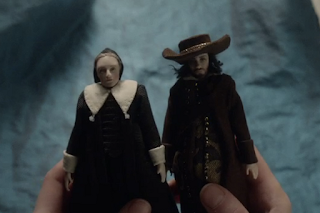 Early in 2017 I was contacted by both the buyer for the BBC production and by Susie Rogers who was coordinating the miniatures for the production .
I was keen to be involved as I loved the book so much .
Reading it my imagination had been captured completely by the mysterious arrival
of the miniature dolls that looked just like the occupants of Nellas home and  people in her life.
I didn't dream I would one day be making those dolls myself so of course I jumped at the opportunity to do so !
﻿ 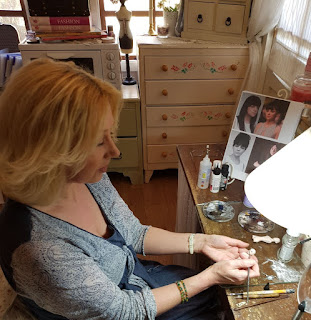 There were a few issues , firstly the timing !
I was to make 7 dolls with a tight deadline for the end of April.
The time I had set aside to work on the new dolls for my table at Miniatura show in March ...
I've never minded a little hard work so I was sure this would not be a problem, who needs sleep ! I would just work from dawn till dusk and all would be okay ....
The brief was a bit of a challenge , these dolls were to look like the dolls of the time , the 1600s.
They were to be portraits of the actors but look like dolls and not tiny people ...
Not only that but although I was to wig them and make their footwear the costuming was to be done by the production costuming team using the fabrics from the full size costumes .
I sent a practice doll off so the costumers could make a toile and practice  clothing and then waited for photos of the actors , which were not forthcoming with any speed.
Not to be deterred I made up 7 bodies with arms and legs leaving the heads for last.
Finally I received the photos of the cast I needed and then it was full speed ahead to recreate them in miniature doll form !
﻿ 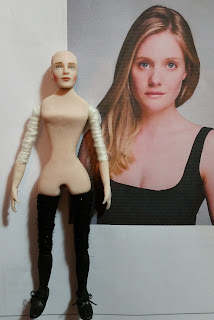 Marin without her wig 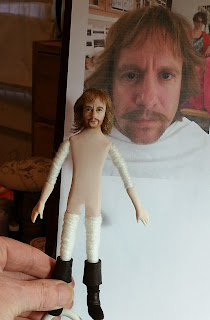 Frans in wig and leather boots 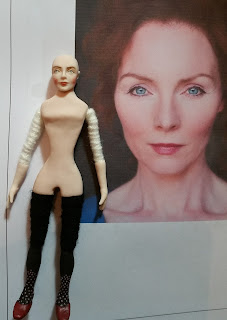 Agnes in her hand painted stockings and replica footwear 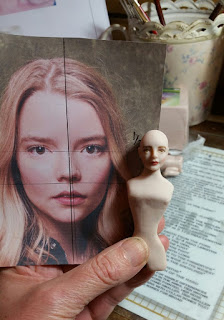 Making Nella , here she is yet to have her limbs . Note her body is sculpted in the shape of a 17th century doll 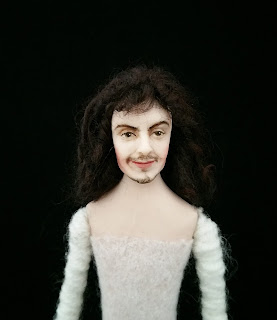 Jack , who was meant to grinning in an evil manner ! 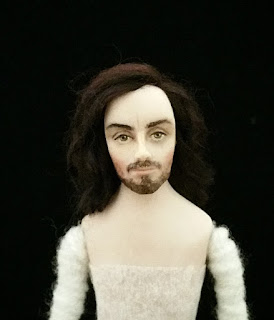 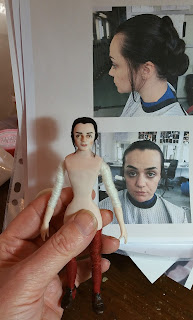 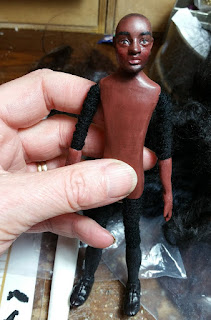 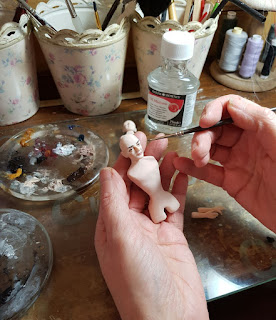 Painting Cornelia
The dolls were all painted in the style of the period with rosy cheeks and strong eyebrows .
Even the male dolls wore a lot of blush !
Although I would love to have costumed them I had to admit on seeing the finished dolls  that it was the right choice for the costuming department to take over.
I usually spend hours sourcing natural fabrics and sewing the clothing to fall in a natural way and look as realistic as possible. I would have found it very difficult to make the stiff doll like costumes that really did make  the dolls look so authentic .
I was pleased to make the footwear though , the male dolls wore long leather boots ( apart from Otto who had shoes and stockings ) and the ladies had rather ornate handpainted stockings based on the actual ones wore by the actors.
Wigging was the final touch  closely following the photo references provided .
After carefully packaging the 7 characters and sending them off it seemed a long wait till December but there was much excitement in my house as boxing day arrived and we sat down to watch the drama.
I loved the adaptation , it was visually stunning and aside from the drama was the delight Im sure all of us real life miniaturists felt in seeing the dolls house and all the beautiful miniatures involved in the production.
A real treat and something I will never forget being a very small part of !
Julie x 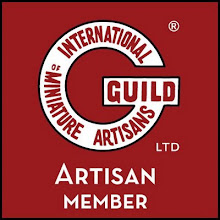 I am a member of AIM . Check out the excellent AIM online magazine by clicking on this logo